“The Lord Be Between Thee and Me For Ever” 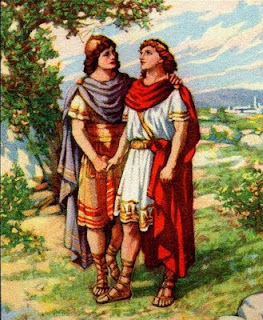 
What are some of the qualities you look for in a friend? Do you look for Godly attributes such as of faith, humility, meekness, patience, virture, kindness and charity.  What about loyalty, what is it exactly? Do we look for it in friends?  Are the attributes of faithfulness, trust and integrity, ingredients for loyalty?  The scriptures teach us that they are and also teach us that the strength of our testimonies is the degree to which we demonstrate loyalty, to our friends and most importantly, to our Savior and to the principles which he taught.  Loyalty in essence is the true test of friendship.

The importance of friendship was established by our Savior when he taught us how to love by saying "“This is my commandment, That ye love one another, as I have loved you." And then He taught us that we are his friends and what that means: “Henceforth I call you not servants; for the servant knoweth not what his lord doeth: but I have called you friends; for all things that I have heard of my Father I have made known unto you.”John 15:12–15.

Then by his prophet Joseph Smith those teachings of friendship were re-enforced when Joseph by word and deed, by every example taught, “Greater love hath no man than this, that a man lay down his life for his friends."John 15:13-14

But even from the beginning, even before all of these the Lord established the importance true friendship and its meaning along with its lasting legacies trough the eternities with David and Jonathan from 1 Samuel of the Old Testament.

Who was Jonathan
After David killed Goliath he was taken before King Saul.  Saul retained David then and would not let him return to his father's house.  He honored David by bringing him into his home and setting him up as the head of the the army.  It was during this time that David developed a close friendship, a brotherhood even, with the eldest son of Saul, who was Jonathan.  The scriptures describe this friendship as a deep devotion and love and the two made a covenant with each other ending with Jonathan, who would have been the heir to the thrown, stripping himself of the robe that was upon him and giving it to David, even his garments, his sword,his bow, and his girdle, he gave him all.  And though David quickly became a hero after he killed Goliath and Saul as well as the entire kingdom honored him, none was as true to David as was Jonathan.  In any day and age that is quite a statement concerning the love and loyalty of friendship.


Part 1: Jonathan and David make a covenant of friendship. Saul becomes jealous of David and tries to kill him. 1 Samuel 18:1–16

Beginning with 1 Samuel 18:1–16. Jonathan and David make a covenant of friendship (18:1–4). David is honored by the Israelites for his success in battle (1 Samuel 18:5–7). Saul becomes jealous of David and tries to kill him with a javelin (18:8–16; note that the Joseph Smith Translation of 1 Samuel 18:10 indicates that the evil spirit that came upon Saul was not from God. 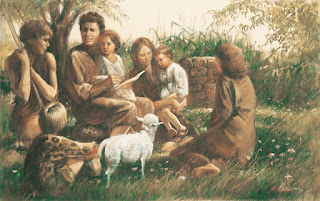